Wednesday evening was the Annual Meeting of the Society of Printers. To get to Boston I took the path of most resistance, a bus from Newport to Providence and then a train into South Station. A four-hour commute thanks to a 45-minute "layover" in Providence, but I can hardly complain as it was so cheap. And it gave me plenty of time to sink into Seamus Murphy's hilarious and poignant Stone Mad, both a classic of the genre and the genre's only book: the memoir of an Irish stone carver. It has the same rustic humor and narrative polish as anything by James Herriot, but instead of tending to the needs of ailing livestock and their flummoxed owners, Murphy chronicles the habits and foibles of other cunning animals, the men who shaped and hewed and incised a country full of cathedrals and gravestones from the very living rock almost a hundred years ago. The fondness with which he treats his apprentice days definitely struck a chord as I made my way to Boston, in my coat pocket the notes for a talk I was due to deliver that evening as part of the SP's Annual Meeting festivities on the subject of my own brief apprenticeship at the John Stevens Shop. Murphy started when he was in his late teens and by the time he was my age, 32, he was flirting with mastery. Though I've come into the game a bit late by classical standards, it occurred to me that this state of early learning, what they taught me at Naropa to call "beginner's mind", is the secret to a kind of stimulating youthfulness. As a broad passion for written language and shared meaning manifested first through typography and now through lettering in stone, with wood engraving possibly on deck, it is exciting to think that I may always enjoy this thrill of apprenticeship. Stay open, keep learning. Write that down, print it. Or carve it in stone.

That was the daydream that wafted me into Boston. As a customary grace note to these SP Wednesdays there was a lunch planned at Jacob Wirth's in the Theater District with a few fellow printers, carrying on a tradition going back to the days when Walter Muir Whitehill strung a cable of pipe smoke connecting Jake's across the Common to his desk at the Boston Athenaeum, where he was Director and Librarian from 1946 to 1973. Here's a picture of him standing over Carl Purington Rollins at the latter's 75th birthday party in 1955, incidentally attended by one John Howard Benson shortly before he died. 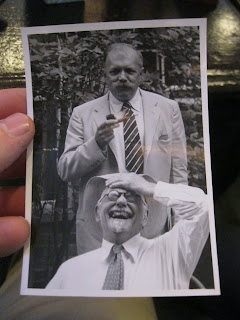 It was a smaller group than usual, but we made up for it in good talk and an impromptu show and tell. The photograph came from one of Toby Hall's magic folders, which invariably contain delightful pieces of ephemera from an age when any dinner gathering of more than one printer was excuse enough to whip up a specially printed menu or keepsake for the occasion. Toby himself was a protege of Whitehill's and produced copies of the late scholar's personal stationery with a pen and ink drawing by Rudolph Ruzicka, printed by The Stinehour Press. 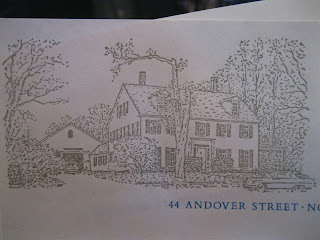 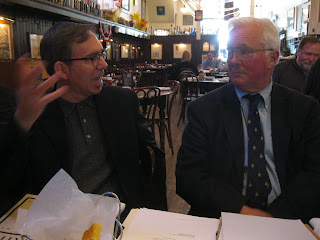 With Whitehill presiding over our lunch in spirit, it seemed only fitting to spend the few hours left until the SP meeting at the Athenaeum. I read over my notes on the fifth-floor terrace high above the Granary Burying Ground, thought about the prospect of speaking before the Society for a firmly regimented 7 minutes and considered taking the advice of a few friends who told me to break a leg. They could hardly expect me to give a speech with a broken leg. Alas. It's not as easy to do as it sounds. I was going to have to go through with it.

I spent the social hour of the meeting catching up with old friends and fielding questions about my time in Newport. There was a general excitement in the air for the evening's entertainment, called a PechaKucha for the Japanese term for the sound of "chit chat". Seven speakers each show 21 slides on a given subject, speaking for 20 seconds per slide for a total of seven minutes. It was a huge hit two years ago when it was introduced to liven up the Society of Printer's final meeting of the year. The topics ranged from world calligraphy to naughty and bizarre books to works of remembrance from a woman whose family endured the Holocaust. I had changed the title of my talk from the bland "Typography in Stone" to the more appropriately theatrical "Crouching Carver, Hidden Alphabet", evoking my attempts as grasshopper to snatch a carved pebble from the master's palm. Something clicked when I saw my name on the projection screen indicating that I was next. It suddenly felt very natural to be up there talking to people about my experience. The format never tripped me up, I didn't feel rushed and I heard a modulating confidence in my voice that never came out in the rehearsal. I actually enjoyed myself. The work is hard, do the work. It was over before I knew it and as I retreated to the back of the room amid the applause from friends and colleagues, I was made perfectly aware that others enjoyed it too. 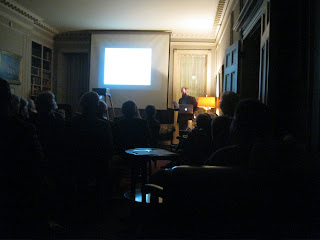