Birthday at the JSS 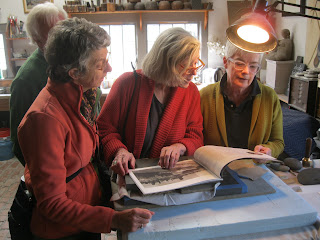 On Saturday I celebrated my birthday at the John Stevens Shop with some family and a few close friends. I won't say that I timed the apprenticeship specifically to fall on my natal month, but the fact is not out of keeping with the general serendipity marking this moment in my life. By mid-afternoon we were about a dozen strong, mostly printers and lettering enthusiasts taking in the museum-like atmosphere, when Nick arrived to explain some of his methods and show off some work. 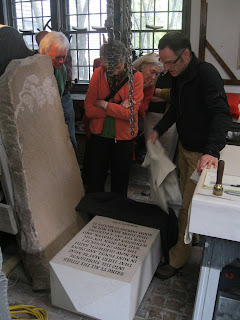 This is a stone featuring his version of the Rustic Roman style adapted from a similar interpretation designed for a wooden sign by John Hegnauer and which hangs from a beam in the shop, serving the dual purpose of keeping our heads up and us working to a high standard. Not that Nick would ever let us lose sight of the latter. At any rate, after he left to enjoy the rest of his Saturday we decided to spend ours on a field trip to the Common Burying Ground, to see the graves of John Howard and Esther Fisher Benson and whatever else caught our eye. 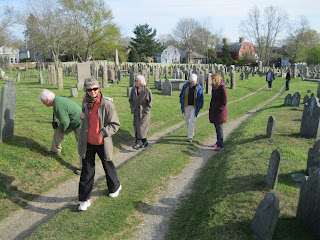 The coastal air carried a refreshing scented chill and the light leaned in for a good look at the work of those robust Colonial carvers. As a tour guide my speech basically consists of, "Hey, look at this amazing, heartbreaking and poignant six-headed stone by John Bull." I've made more than a few visits here and it has lost nothing of its impact. 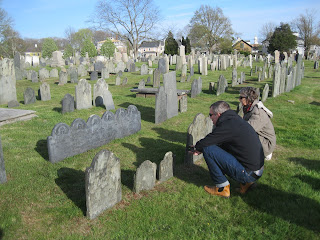 It is so beyond the imaginative scale of any other work of Colonial carving that I've seen, I have to wonder if it has any rivals or what sort of precedent Bull had to work from. Perhaps the story is told in Vincent Luti's Mallet and Chisel, about the lettercarvers in 18th-century Newport.

From the Common Burying Ground we proceeded to Yesterday's for dinner and a few celebratory ales. The main entertainment for the evening was a raffle to rename my press, which I've been considering to incorporate carving into my "identity." Some highlights included Leopardskin Pillbox Hat Press and Chisel, Jellybean Press and Heavy Things, Marks 4 U, and Jesse the Jobber. Good suggestions all. I'll think about it. Cheers to family and good friends sharing an awesome time in a special place. 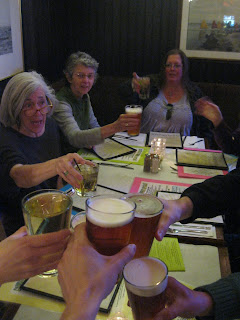 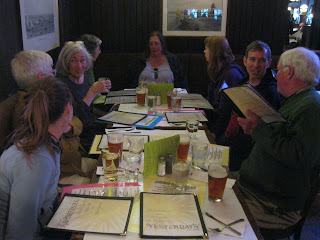 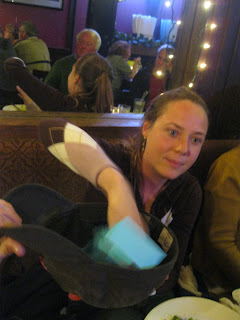