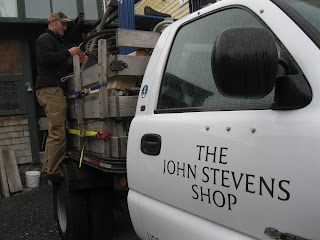 Early on a wet and raw Tuesday morning, Nick and Paul set off for the FDR Memorial on Roosevelt Island in NYC, where they'll be spending the next month and a half carving the inscriptions that will put the finishing touches on Louis I. Kahn's resurrected design. The memorial was shovel-ready in the early seventies, but when the city went bankrupt in 1975 the project was shelved indefinitely. Now it has been taken up by a number of philanthropic New Yorkers and realized essentially without modern corporate interference. Rare indeed.

Nick and Paul were psyched to get moving, even in a cold rain, an enthusiasm that was half "Road trip!", half "Git 'er done!" They take with them much of the comic fraternity that makes the JSS such an awesome place to work for. Josh and I, the honorable left-behind, will still manage to have a good time, after all the work itself is fun. But doesn't it feel like the whole show is coming to a close, at least this chapter. It does. Because it is. Less than two weeks to go. However, in terms of what I need to get done before I head back to Boston, I don't have much time for moping by the window. Last time I checked the alphabet doesn't carve itself! 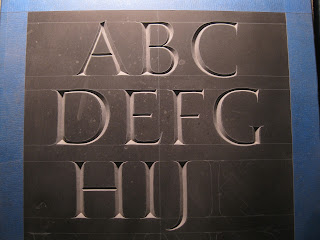 Just under halfway to Z. The letters are 1.5 inches tall, larger than anything else I've yet practiced on, so of course I'm working even more slowly than usual. I'm also trying to absolutely nail it, which makes for all lente and little festina. The trick will be to get up to a decent speed, maybe 2.5 letters an hour, to make the endeavor remotely profitable. Another limiting factor is the Italian slate, which plucks if you carve too aggressively. Plucking is the very irritating damage resulting from some combination of too fast, too soft and too dull. The chisel catches on the stone instead of gliding through, essentially ripping out tiny chunks of slate and leaving black sockets that require more material than might be available to clean up. I think I've about got it under control. 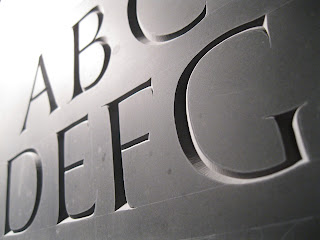