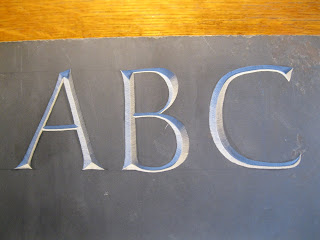 In the beginning. ABC. These three letters, carved in black slate from Monson, Maine, represent where I've taken the craft of letter carving in stone more or less through self-teaching in my spare time over the last two years.

I've received encouragement, criticism and advice from carvers like Douglas Coffin (ME), Scott Wall (MA) and Nick Benson (RI), but until tomorrow no formal instruction. Thanks very kindly to Lynne Williamson at the Institute for Community Research in Connecticut, tomorrow I will begin a six-week apprenticeship at The John Stevens Shop, where I expect to learn or at least begin to comprehend every aspect of the trade, from brush-lettering layouts to carving and gilding to setting gravestones in cemeteries. Now that the ground has thawed, the winter's work can see the sun.

The Shop has operated continuously since 1705, run by two great American families, the Stevens (1705-1926) and now the Bensons (1927-present). In the United States it is the only workshop of its kind, and I'm grateful for the chance to study there. Six weeks isn't a long time, but I will undoubtedly learn more in that span than I could teach myself in six years. So the thinking goes.

There is enough room on this piece of black slate for me to check in with another ABC every two weeks. It should make for an interesting if somewhat burdensome document to look back on, an apprentice grasping toward his ideal alphabet. For this will be the goal of the apprenticeship: a gilded alphabet as perfect as I can make it.
Posted by Jesse at 3:31 PM 1 comment: