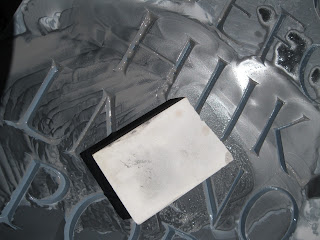 And now we come to the end. All that's left is to grit off the excess paint and the letters will be revealed. Gritting the stone is the first and last act in the little dramedy of carving an inscription. I remembered all too well the problem I had at the beginning, when hard crystals got trapped under the block of grit and scribed little curlicues in the surface of the stone, little forged signatures left by the polishing motion. Not deep but enough to mar the finish and certainly enough to irritate. When I told John about the issue he cheerfully pointed out that it's because I was doing it wrong. The grinding agent is the slurry that builds up under a block of grit rubbed over wet stone, but if you let it get too wet the grit washes off and there's the potential for crystals to sneak in. So you can imagine my apprehension at having to repeat this process at the very end, with the entire living alphabet at stake. Only the competent man shall pass. 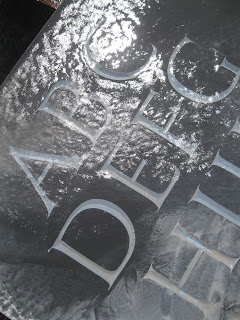 The whole process of carving letters in stone is exciting and fun, but this is the only stage where something like magic creeps in. The hypnotically bright contrast of painted letters in polished stone shining through a film of water is visually unlike any other effect I've seen. Raking light over a crisp impression is quite lovely, but somehow this scootches things up a notch. 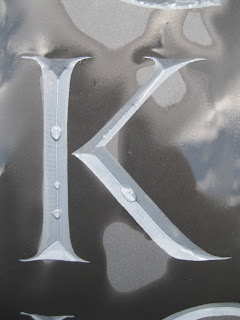 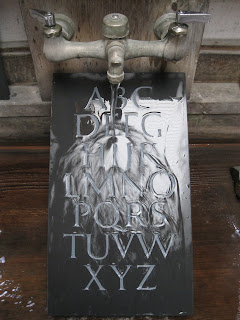 Once my alphabet was ogle-dried I filed an eighth-of-an-inch chamfer on all four sides of the stone. A simple fabrication that makes it look sharp. 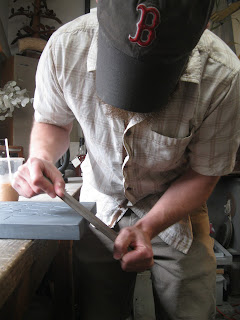 I then asked John to show me his oiling technique. Whatever nicks or scrapes left by the grit stone on the non-carved surface, and alas there were a few more which I couldn't seem to avoid, tend to disappear behind the polish. Also it sharpens the contrast between the surface and the painted letters, as Italian slate is a fairly gray black when dry. Using a mix of turpentine and linseed oil applied by a strip of old cotton bedsheet wrapped tightly around a wooden block, John walked me through the finishing touch. 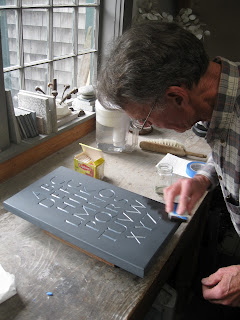 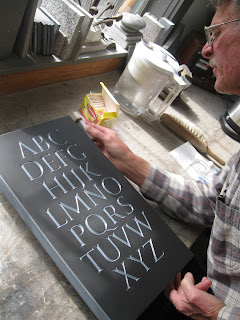 All of this took place last Friday. On Saturday afternoon I was on the road back to Boston by way of my parents' house in Hudson for Mother's Day. Hard to believe that six weeks at the John Stevens Shop have come and gone. Given what I have to show for my efforts, I'm glad to see how far I've traveled in that short time. I am extremely grateful to all those in Newport (Nick, Paul, John, Josh, etc.) and beyond (Lynne, my parents, Meg, etc.) who helped make the experience possible and so illuminating. Though the formal apprenticeship period has ended, the extended beginning to the informal apprenticeship is ongoing. A few small commissions have come in from family and friends helping to launch me in this new endeavor, and the hope is that more will follow in the weeks and months (and years) to come. After a month and a half of regular upkeep, I've grown quite fond of the blog format. Thank you to all of those who have responded so positively to this writing experiment. Your reward is another blog, which will keep track of my printing and carving adventures as I slowly transition to sole proprietorship in these fields at the end of the summer. I suppose joining Facebook is inevitable. But until then, if any of this has been of interest to you, please refer from now on to marsolaispress.blogspot.com, the new digital home of Marsolais Press & Lettercarving. For a parting shot, a before and after of a week's work three years in the making. Cheers. 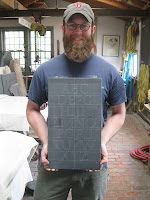 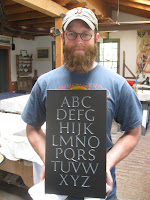