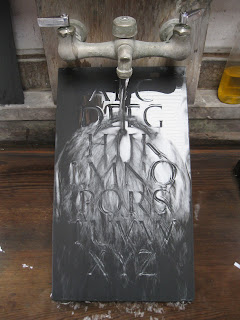 With only a few days to spare, I finished carving my alphabet stone. The protective tape border has been removed and the fixative gritted off. Now after a thorough rinse I'll be able to see what I'm doing. Or rather what I've done. Without the white outlines my letters will stand in relation only to each other, and the success of the piece will come down to how well I was able to maintain a consistent depth and width to all of the various weights, thick/thin, stem/leg, crossbar/bowl. I was reminded of Paul Valery's rather elegant fatalism, that a poem is never finished, only abandoned. At some point you just have to put your tools down and walk away. Or pick up new tools, like a paint brush or gilding materials. (I'm going with the former. Gilding demands perfection.)

It is perhaps a bit early to begin offering a final analysis, but it occurs to me that what I've learned most over the last six weeks is not so much how to do it right as to see what's wrong. There is no question that I'm leaving a vastly improved carver, nor would I dispute the fact that this alphabet is the best I can do, the best I have done. But if this has been a sort of lettering boot camp, I'm probably still too busy burning fat to gain a lot of muscle. But it will come. Someday I'll be ripped! I mean, good at lettering. End of metaphor. Alright, the stone is dry, let's see what we've got. 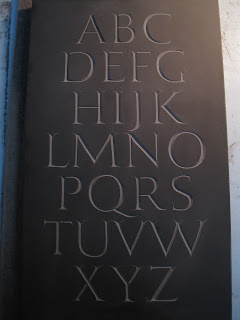 Well, what we've got are some spacing issues (RS, XY). And my Q belongs to a slightly larger alphabet. And from a layout standpoint it's a little bottom-heavy. But overall it offers its fair share of satisfactions. Almost every letter is better than any other version I've yet drawn, brushed and carved. It is a portrait of this moment in my development and is thus full of information about what to do differently the next time an alphabet stone comes around. I did a rubbing for archival purposes, which gives a better sense of the letter shapes. At least it does in person. 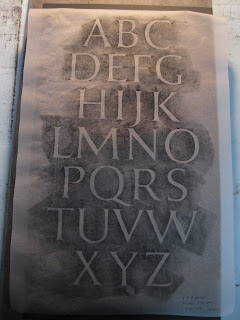 The next step is to seal the inscription with a coating of shellac. This will prepare the letters for painting, which John demonstrated on my earlier practice stone. 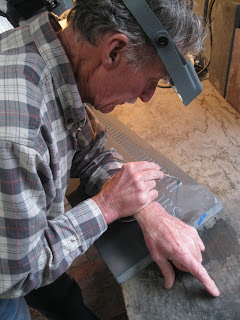 I'm going for a rather conventional gray, which will contrast nicely with the oiled black slate. I'll experiment with more whimsical color schemes on future projects. I want to keep this one clean and simple. It's anything but clean now. But that excitement the carver feels when he grits off the excess paint and sees the letters emerge from the water, man. I'm told it never goes away. 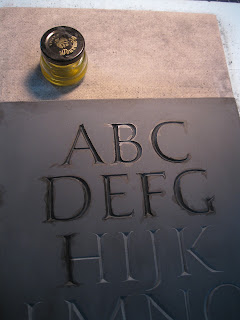 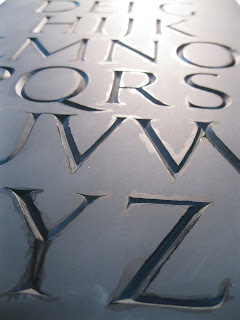