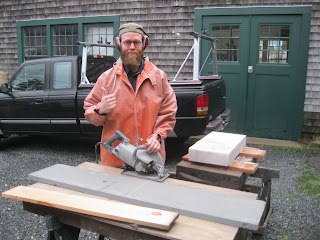 April 2nd, the day after April Fool's Day. Here I am belatedly dressing the part. While most people were still sleeping or sitting on the edge of the bed psyching up to face the day's work, I was taking a water-cooled Skil saw to a slab of Italian slate. The chisel hits the stone at 7 am at the John Stevens Shop. It's not a time of day I'm particularly familiar with, but nonetheless I was up at 6 with a Christmas-morning leap out of bed, ready to get started. When I came down from the apartment Nick was already doing nine things at once, taking out the trash, stowing tools, checking lists, wrapping cords. He has two speeds: double-time and asleep. Though I imagine he's more like Chuck Norris in the latter regard: he doesn't sleep, he waits.

Watching Nick do everything I had assumed I was supposed to do, I felt a bit superfluous standing there in the light and dust of the Shop. But soon I was given a task: cut this piece of slate. My carving lessons would begin with a row of gently waisted stems, waist being the narrowing in the middle of a straight letter stroke, the influence of the brush. Nick would lay them down like a track of ties without the rails, and I, as they say around here, would move and shake.

Once the whole became two halves, a decent amount of effort went into preparing the surface of the slate for carving. This involves rubbing the wet surface in a circular fashion with a brick of fine-grained sanding stone, grasshopper style: wax on, blemishes off. 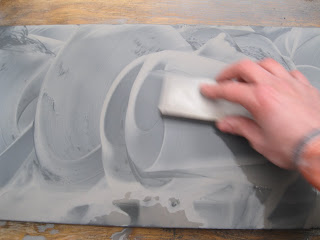 It's hard to tell when enough is enough, because when the slate is wet it looks beautiful and clean. But Italian slate, as I now understand, is incredibly soft and bruises easily. For my purposes it wasn't essential to buff it to a mirror shine, but doing a nice job is always good practice. Paul Russo helped me get the desired effect, pointing out spots I'd missed and recommending various grits of sanding stone to use. The next time Nick sprinted by I had two stones prepped for layout.

It is surprisingly difficult to carve in a straight line. Depending on the angle of the chisel or the force of taps and one's level of carelessness, the tungsten carbide will chew happily off-track into a plane in the v-cut, requiring considerable effort, if it's even possible, to regain the plum. So why not try paying attention? That's what this exercise was about. Consistency and care. 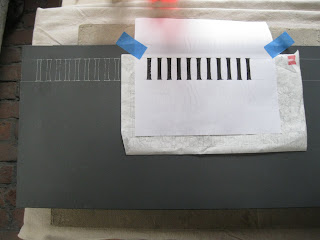 It was also about accurately transferring letters onto the stone, using a stylus and white carbon paper. Every stage of the process requires supreme concentration, and while the alive mind can make subtle aesthetic changes as it goes along, the operating sequence is good, better, best. For a commissioned work the letters in white outline would then be rebrushed. But here I just need a lot of something to carve. 22 I's will keep me busy for a few days at my slow, cautious pace.

With Josh Larkum working nearby on a marker, Paul starting in on a gravestone across the room and Nick doing laps around the shop, it's a stimulatingly fraternal atmosphere at the JSS. The work is taken so seriously that there isn't much serious left over when it's time to take yourself. There's a call-and-response gospel of associations, impressions and inside jokes that keeps the mood light, which is as it should be. I pretty much have no idea what they're talking about.

Every now and then we'd put down our tools and devote some back strength to stock logistics: figuring out the order of urgency for jobs ready to be carved and when finished work will leave to make room for more stone. 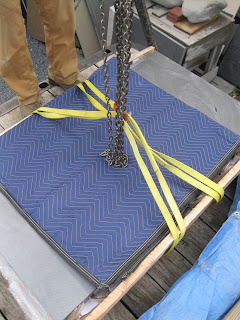 We hauled in, rearranged and stacked about a ton of stone, which is to say only a handful of memorials. Nick runs the Shop with an Admiral's sense of order ("Coil the hose like they would in the Navy, ok?"), and when we were done there was more stone taking up less space. I went back to my exercise and spent the rest of the afternoon invested in a funny narcissism: I, I, I, I... 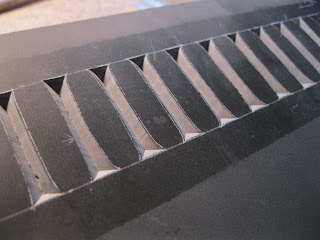 By the end of the day I had managed nine I's. The tenth is Nick's, showing me how and where I should expect to begin tomorrow. The longest sustained period of carving I had done before today was maybe two hours. After a full work day and an after-hour beach stone just for fun, I can see, and feel, how this line of work could wear you down. Simply knowing how to stand properly when working flat can make an enormous difference in comfort and stamina. Too much unsupported bending will make for long days indeed. But as a friend says, that ain't rocket surgery.

It is, however, a hell of a lot of hard fun. Beyond the joy of finding beautiful letters hiding there all along in the stone, the job comes with a few simple pleasures, like a beer in hand after a long, good (first) day. 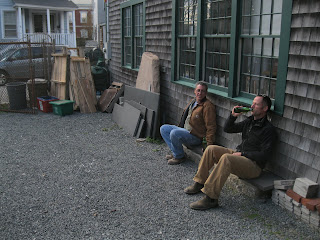 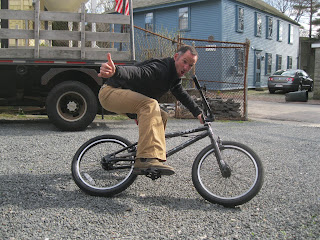